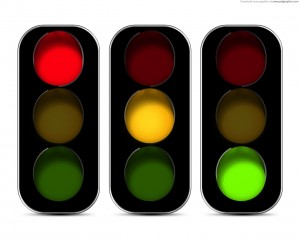 One of the first things people new to deliberate creation try to manifest are either parking spaces or green lights.

As there are a lot of traffic lights in the city I live in, I decided to try my hand at manifesting green traffic lights on my drive to work and back every day.

It got to the point where I finally began laughing about how effective I had become at deliberately creating red lights for me and green lights for drivers going in the opposite direction at intersections. And that’s when it finally hit me – I finally understood what was going on and why I was manifesting what I was receiving.

What I ended up manifesting was the Universe reminding me that I did not like having to travel like this every morning and the Universe was doing what it could to keep me in the city I live in by putting all the red traffic lights in my path every morning!! How very cleaver of the Universe.

Once I realized this, and began feeling better about my drives between cities every morning, I began getting more and more green lights on my way to work. Now its about 50/50 green to red which is fine for me.

So what lessons did I learn from this: