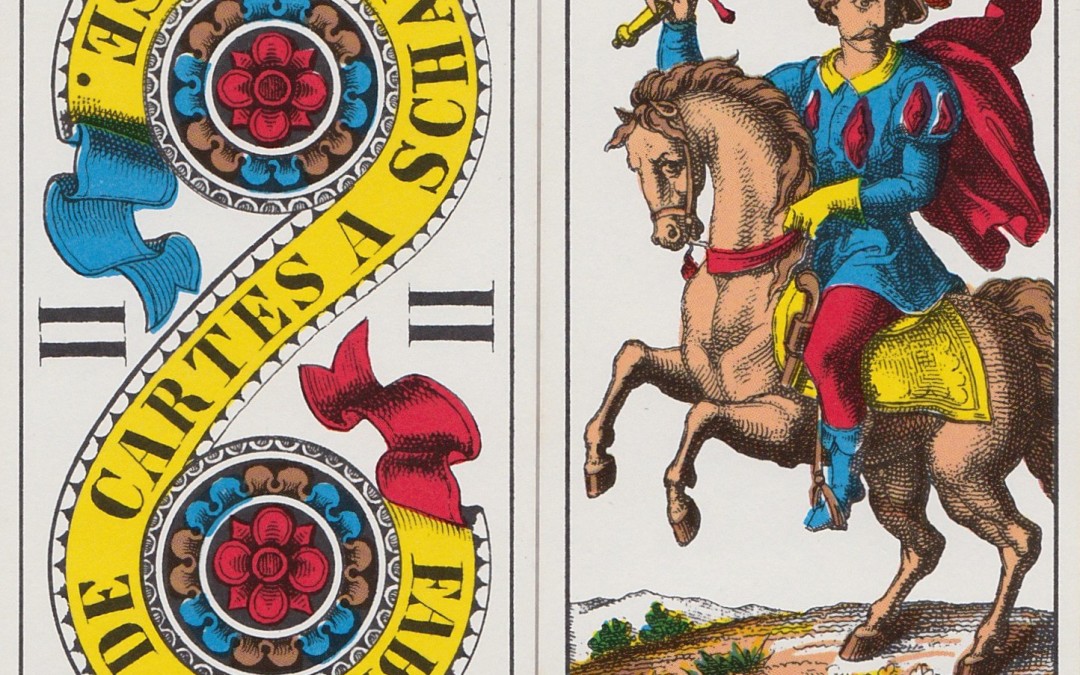 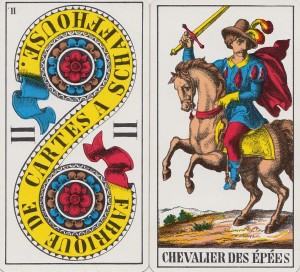 This AG Muller Gypsy Witch Tarot deck that I ended up with is very much in the style of the Marseille Deck – very colorful, very devoid of symbols, very French – and to this day, I still cannot get the  cards to speak to me!! This relationship is definitely going to need some effort if I ever hope to make it work, in fact, these cards refused to share a message with me today!!

Looking back I realize that, whatever Tarot ‘reading’ I was doing back in the early days with the Gypsy Witch Tarot was very superficial – shuffle the cards, lay out the spread (the Celtic Cross spread, of course!!) and read the keywords for each, individual card: Card 1, Me in the reading: two of pentacles = gaiety, recreation, obstacles, agitation (sounds good!!); Card 9, Hopes and Fears: Knight of Swords = skill, bravery (hmmmm, I wonder what I need to be brave about?!?). I got bits of information out of these readings, but not really very much compared to what I now know can be gained from a good reading.

The Aquarian Tarot
4 of Swords

The Four of Swords card from the Aquarian Tarot Deck wanted to share it’s message today – this is a card of rest and rejuvenation. The Swords are all about thinking and ideas, the 4’s are about pausing for a bit, reflecting on or enjoying what has already happened while preparing for what is to come. For me this 4 of Swords card is saying that there has been a recent period involving lots of thinking, lots of ideas, lots of choices, now is the time to pause, to take a break, to rest and take stock of what has been happening, to allow the mind to recuperate and inspiration to be renewed. Not bad for accuracy considering I haven’t touched these cards in years – in fact, that is exactly what I did do today!!

So, how should someone who is just beginning to explore Tarot, select a deck?

There are basically two ways for someone who is just beginning to explore Tarot, to select a Tarot deck:

The deck that I would recommend for anyone who is seriously wanting to become tuned in to the Tarot is the Ryder-Waite Tarot decks, or at the very least the Aquarian Tarot deck.

Ryder-Waite Tarot decks may not be everyone’s first choice in terms of aesthetics, but these decks are some of the best decks for beginners, for two really important reasons:

As for the Aquarian Tarot Deck, well it contains many of the symbols and imagery found in Ryder-Waite Tarot decks but in a scaled down version. The Aquarian Tarot Deck makes a great alternative for anyone interested in a simplified, less cluttered. but still really meaningful Tarot deck – unfortunately there are not a lot of interpretation books based on the Aquarian Tarot deck so you will need to do a fair amount of ‘interpreting’ or ‘translating’ to gain full insight into the symbolism on these cards – but at least you are heading in the right direction with these cards.